Gaming in the Latin Classroom: Heroes and Harpies™

When I was trying to figure out how to write this blog, I kept banging my head against the same wall: this particular game was based off of Dungeons and Dragons, a role play game that requires a lot of leadership by a central figure who runs the game and not only organizes play live but has to react to any eventualities that come up--and they come up--when players decide to act differently than you expect them to--which they do. All this to say, it's the type of game that is more difficult to run with no gaming experience.

And I've been trying to figure out how to write a guide for other teachers who may or may not be gamers.

So this post has been put off for over six months because I haven't been able to solve this puzzle.

I have finally come to the conclusion that either one of two things is happening: 1) I am blowing this way out of proportion and I can just give you guys the rules and it will be fine. 2) This is the type of game that gamers can play with students and non-gamers cannot. If that's true, and you are a non-gamer, but want to play an in-depth role-play game with your students, let me direct you instead to my post about last year's game: Bellum Civile: Gaming Caesar's Civil War. This is a much more accessible game with a lot of scaffolding and it was a lot of fun for me as a gamer.

But this time last year I really wanted to dive into a more collaborative, D&D like game, where students would create heroes and fight monsters and even save the world a little. I decided I wanted my heroes to be children of lesser-known Roman gods, and I enlisted my son to help me create the rules--he's great both at helping me brainstorm ideas and at figuring out ways to break the system so I could look for some holes ahead of time--and together we came up with sets of powers that students could buy over time with experience points they earned in encounters. He also helped me come up with some of the encounters and the overlying storyline, and then I created the materials for us to use in class.

I put students into small groups to create their characters; though an experienced gamer, I am a fairly inexperienced Dungeon Master, so running a game with 29 different characters was not going to happen. I ended up with nine characters with between 2 and 4 students running each, and a few half-siblings (I didn't require students to only pick gods no one else had picked). 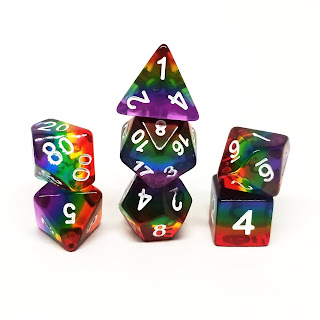 The first encounter (i.e., fight or interaction) was slow because I had to teach them how to do things, but after a couple, they had things down and could move pretty quickly through the steps. Before each encounter, I wrote a reading, that we handled like any reading, with discussion, clarification, and review, and I gave them a visual reference for each encounter so they could use that to help them plan their moves.

So far, this doesn't seem too difficult. To some degree, this is something anyone can pick up. However, the encounters were designed to highlight the strengths of each character--some emphasized stealth for the son of Muta, and some were convenient to water for the daughter of Fons. Some were good old-fashioned fights to let the daughter of Victoria stand out, and some included large groups because I knew that the daughters of Feronia had both bought powers that would work especially well against a crowd and the daughters of Hecate had just earned their war dogs. Part of running a good game of this type is making sure that each character feels useful and special without being too obvious about it. And this is the part that gets difficult--the personalization.

SO... I am going to provide the materials I made, and the rules, and if you decide to run this game I would love to hear about it! OR if you run this game with adults, I'd love to hear about it, though it's really made for a class. I had exactly three experienced role-players in my class and one other student who had passing knowledge, so they were much less likely to abuse the rules, so they definitely need some serious play-testing before they are ready for that level of play, in my opinion, but I'd love for some beta-testing to happen and then, who knows, maybe I'd release an official version, with credit to any testers!

Below you'll find a link to the game handbook. At some point I'll work on creating a module (a baseline game for the uninitiated) out of the story I made for the class, but it's highly personalized to my students' characters, so I need to work on it a lot before it can become a good module.

Small story: one of my favorite encounters was one of the encounters that went sideways--I'd planned for it to be a basic fight against a cyclops, and that was good, because I'd been out late to see Rent with my son the night before. I wasn't up to heavy thought and was looking forward to simply rolling dice. However my students had a different plan. They decided to negotiate with the cyclops. For the first time ever they didn't just attack. Suddenly I found myself making up rules for negotiating and holding a conversation with them in Latin while searching in my head a way to make sure the encounter would still be interesting and challenging. Luckily they tripped up by offering to prove their wish for friendship! I remembered that one of Hecate's daughters had recently bought an ability to transmute things and answered that the Cyclops always wanted to have a real, true pink sheep to breed with its flock. It took them some time to figure out how to do it; I found that my students often forgot their newest powers. Once they figured it out, they made friends with the Cyclops, who let them cross his island without trying to squish them like ants! It ended up being a really satisfying encounter and cute story, and even though I was totally thrown, barely able to think, and nursing a lack-of-sleep migraine, they never had to know I hadn't planned it the whole time.

Heroes et Harpyriae
Posted by Rachel Ash at 10:27 AM