Today I woke up and (as happens all-too-often) realized that I really had no realistic plan for teaching my Latin II class. I was bored with the normal day-to-day activities that we all do as standby, and wanted to do something a little different.
As I stood looking around my room, willing my desks and chairs to give me an idea, that ever-elusive muse of teaching touched me and I knew what I was going to do with my students—we were going to make a quilt! A paper quilt, clare, because I don’t have the money for fabric or ... (you can read the rest here) 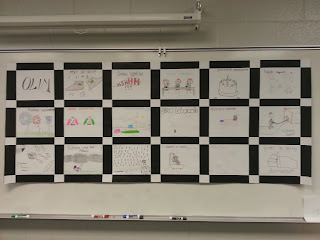 Posted by Rachel Ash at 8:58 PM No comments:

Activity for an Insomniac: Quick, Easy, and No Prep!

Last week I was facing my class after a night of almost no sleep.  Like many teachers, there are those times when my head gets filled with a huge list of responsibilities that have to be carried out in the next day or week.  This was one of those times; I woke and started working out how I was going to get everything done.  Unfortunately this was around 1 AM.  Which meant that when I finally got to school and had to teach around 6 hours later, I had little energy to offer my students. 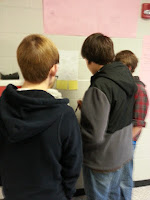 Often on days where I'm sick or feeling wiped out (which are rare) I fall back on worksheets, which my class receives rarely enough that a worksheet elicits concern from my kids. 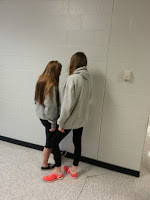 This time, however, my son had just been sick the week before and I had given the substitute worksheets for my students to do while I was away.  I really had no interest in giving them worksheets again.  As the clock ticked closer to our late bell, I finally realized what I could do that would be low impact on me and enjoyable to my kids. 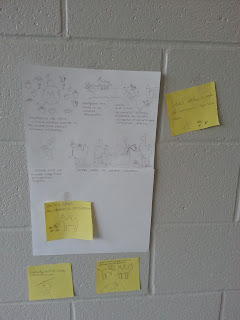 I assigned a comic.  They were required to form small groups (I arranged the desks in 4-person "tables" before class actually started) and write a comic in the passive voice (the grammar topic we've been working on).  Once I had all the comics turned in, I taped them around the hall, far enough away from each other that students wouldn't have to crowd each other to read them. 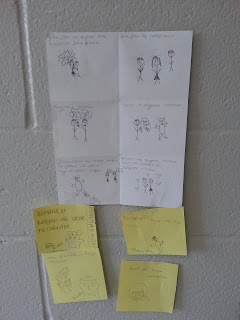 Lastly, because I wanted them to interact with each other's work, I gave each group seven squares of paper.  The papers were new comic panels, I explained,  for them to write and illustrate new endings for their classmates' comics.  Groups fanned out and eagerly read the other comics and discussed the best way to change each story.  There was a lot of discussion, a lot of laughter, and only a little need for a Latin teacher.   So I stood back and watched the movement and the relaxed Latin atmosphere.

I will break this activity out again sometime--it's a great rainy day activity with its natural kinesthetic aspect and light tone.  Yet students had to flex their Latin muscles too as well as solve the problem of writing an entire story in the passive voice (try it--it's hard).

If you've used similar activities in your classes, I would love to hear about it!  Post below.
Posted by Rachel Ash at 2:18 PM 2 comments: