2014 In Review: Or What My Students Really Thought

Following Bob Patrick's advice in his presentation on the No Failure Classroom, I skipped all the websites, articles, and blogs on student feedback and simply asked three questions:

I am still going through these and plan a follow up in a few weeks during pre-planning where I'll discuss the third question in more detail, namely, the things I do and don't plan to change and why.

For this post, I want to reflect on the Comprehensible Input activities we did do and students' main responses to them. I am not going to go over all of them, especially not the ones I intend to talk about later, but there was a nice amount of variation in the things they brought up. 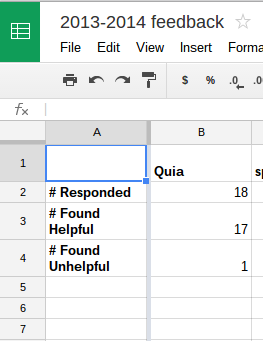 I recorded their responses in a Google spreadsheet and used a formula to count the number of responses. Originally I wasn't going to count responses, but then it occurred to me that it would be helpful to simply see how many students wanted to comment on it.

I polled all of my students. Of the roughly 130 of them, a few did respond with things like, "everything helped" or, "I can't think of anything", but mostly they were incredibly specific, some even providing detailed explanations.

I did not provide them a list of activities and I did not ask them to comment on certain things. Instead, I left it completely open and have only recorded their responses.

I really enjoyed reading their feedback for the most part and I do intend to give a report to them when we go back to school. While I will not take all of their advice, it has opened my eyes a little to the way I do things and some things I should change.

In my next post, which I'll post probably in about two weeks or so, I want to focus on Timed Writes, Sustained Silent Reading, Speed Date Reading, and my lesson plan book for this next year.

Did you use a different feedback system? I'd love to hear what your kids had to say.
Posted by Unknown at 8:12 AM 2 comments: