Review Stations to Ring in the Finals 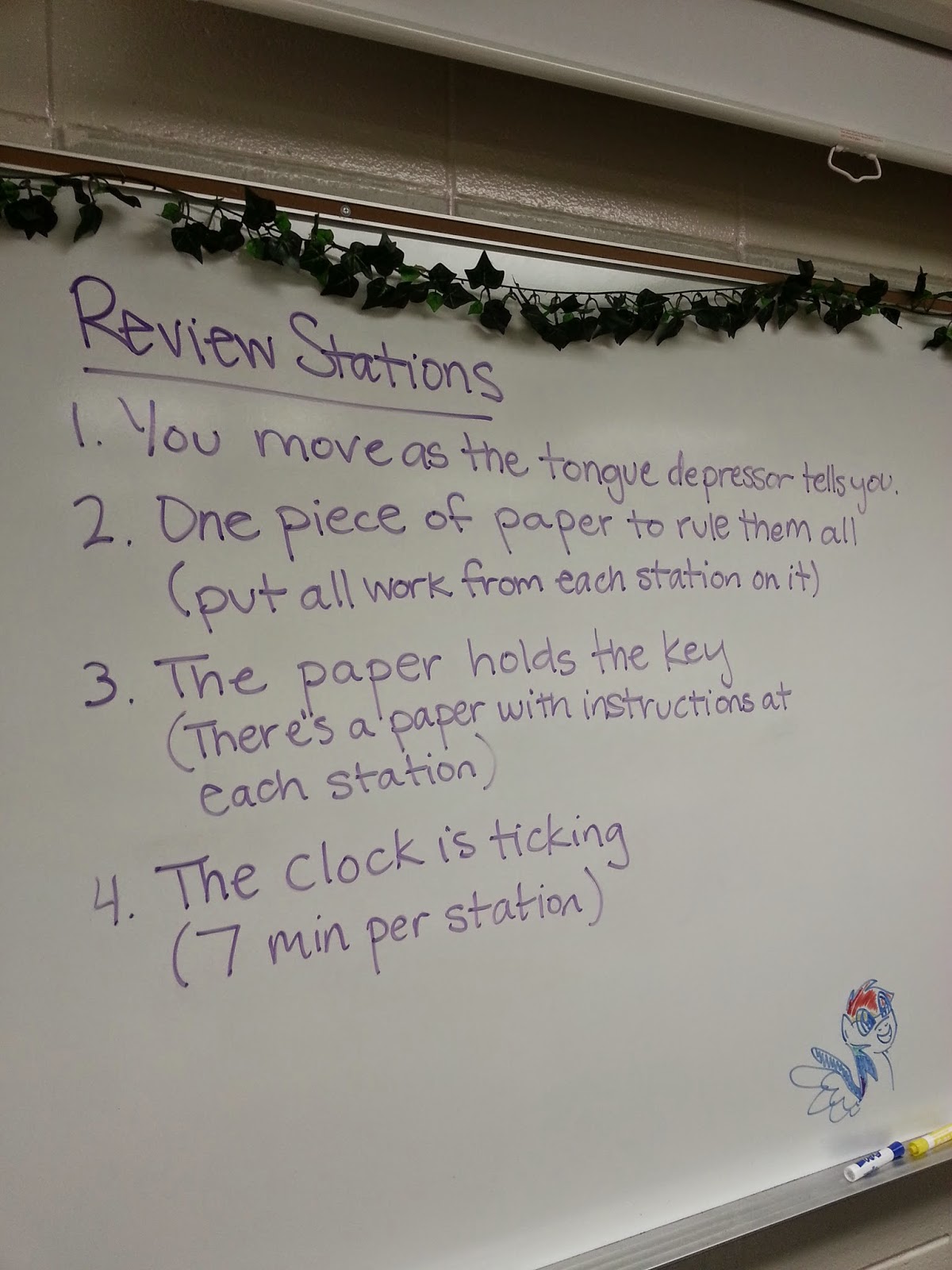 This is just a quick post to tell you about what I'm doing in my classes today. Mostly because I love this kind of review--it's very independent--and it helps the kids by asking them to think in unusual ways and has them up and moving.

They enter with the desks rearranged into six "stations," each with a story selected from the stories we've read this semester and a set of instructions. You can find the complete instructions here, but they boil down to one of the following: write a haiku, song, 2-sentence summary, or parallel story (all in Latin), draw a single scene to illustrate the entire story, or draw a short comic. 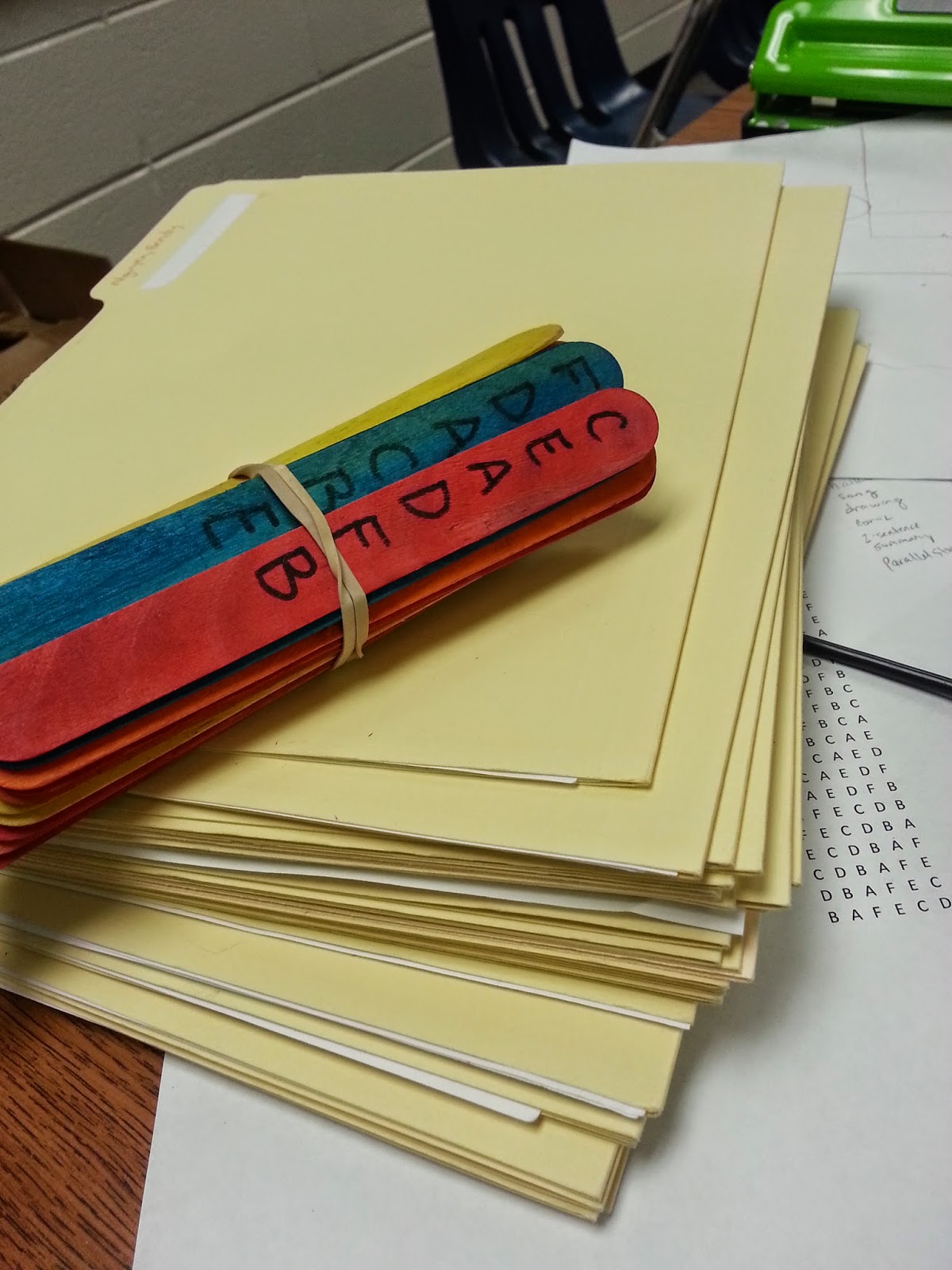 The instructions on the board are pretty straight-forward, and I always explain everything pretty thoroughly the first few times students face this kind of activity. I have them turn in a paper with all of their work so they focus and get it done. It's something I can record quickly while they take their finals next week.

To help students know where to sit when, I wrote combinations of letters on tongue depressors that I will hand out and ask them to follow. This helps them mix up each time they are at each station so they work with different people all the time (I posted my current incarnation of the letters here--it's just a list of thirty six letter sets, and I repeat some if I have more students).

And that's basically it! Simple, easy activity for the end of the semester!
Posted by Rachel Ash at 7:22 AM No comments:

Email ThisBlogThis!Share to TwitterShare to FacebookShare to Pinterest
Labels: reading

I've been writing some heavy (read: long) posts lately, so I thought I'd do something light, describing a three-day sequence of activities I recently did in my class.

Basically, I used the stories we produced in class via asking a story as reading material that could produce more repetitions of vocabulary and give me a break from creating the repetitions myself.

I usually draw pictures to illustrate our stories as we go (by that I mean I draw stick figures like crazy) so students and I have a visual both to reference for vocabulary and to remember the details. If a student asks, I will allow the student to draw for us instead, as long and he/she is willing to sacrifice beauty for speed and not be a distraction. Either way, I have a visual record of each story as we tell it. I took advantage of that image and at the end of each class I took a picture of the board. This was very handy because I teach six classes and I forget many details over the course of a day.

At the end of the day, I typed up the stories from each class, using the pictures as reference, and glossing any words that were particular to a class but not universal across classes (what my CI training calls "icing words"--words that are not intended for students to learn, but that they learn because of interest; each class tends towards different interests).

We began the day by reading the stories from each class and having the students discuss which stories they liked best (aside from their own, which they of course favored). Then I asked new stories, drew pictures, took pictures, and typed them up.

Armed with stories from two days of asking, with repetitions of the words built in sixfold, we started with students again reading the stories from each class and discussing which stories they liked best. Then I gave an extension assignment I like to use when I have time to give to it (because it takes at least one period, sometimes two): writing a children's book.

They really are not advanced enough to write a grammatically correct story on their own (they are in their first year), so I had them choose one of the twelve stories we now had and write one-two sentences per page with clear (not necessarily beautiful) illustrations. I put this instruction powerpoint on my board, and was able to grade the books as they came in pretty simply.

Quick, easy, and a nice brain break. Plus repetitions. Also, once you've done this in your class, you can leave similar assignments for a substitute--one of the hardest things to figure out when you teach CI style--and it's not so much of a strain!
Posted by Rachel Ash at 2:39 PM No comments: