This past weekend, Bob Patrick (@bobpatrick), Keith Toda (@silvius_toda), Rachel, and I all attended the Alabama World Language Association's 2017 conference in Auburn. We were all very thankful to have been invited to submit presentations and to have them accepted.

We decided to present a series on Comprehensible Input from a variety of considerations. Below are the titles, descriptions, and links to our presentations. If you have any questions, or if there are any issues with these links, please let me know in the comments below!


Finally, a special thank you to AWLA for hosting a wonderful event and thank you Elizabeth Connor for the wonderful invitation! 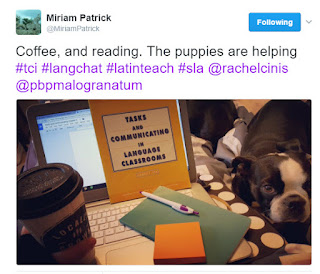 Posted by Rachel Ash at 1:26 PM No comments: