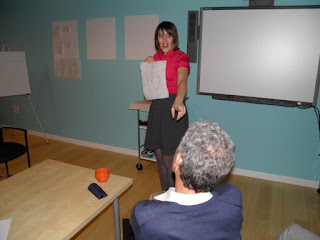 I am really excited to continue to take part in the CASIE Speakeasies.  I am already enrolled in one for Gaelic and another for Bulgarian.
Posted by Rachel Ash at 3:26 PM 2 comments:

My Date With CASIE (Part I)

This is the first of what will become two posts over a great program I was part of last Wednesday.  The reason I have split the post into two is simple.  This first post, a video of my entire lesson, is a lengthy engagement.  I don't want to ask more than that in this post.

CASIE's Speakeasy format is a lesson in a language taught in the target language.  This is my lesson, mostly inspired by my experience teaching in the TPRS and Communicative format.  Many teachers have asked me for examples of how I teach Latin via TPRS, and thanks to the generosity of CASIE and my participants, I now have a full-length beginning class to offer.