Shortly into the school year, I wanted some quick and easy feedback from my Latin I students to find out what, out of the new vocabulary, they felt like they really knew and what they felt like needed more work. That way I could focus the beginning of the next week on the vocabulary they needed most, and I would be building trust with them that their input is valuable to me. Wins all around.

Okay, so that's partially a lie.

I really wanted an excuse to try out a new toy: printed post-its! 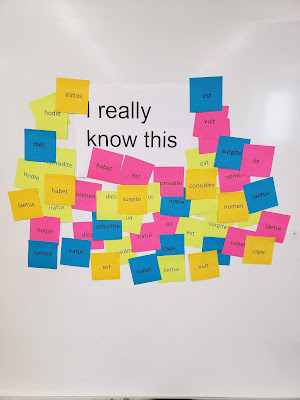 The fabulous Meredith White (@PRHSspanish) has been sharing some of the things she's been doing with printed post-its on Facebook and Twitter lately, and I just wanted to try out the new technology. You can find the tutorial she shared on printing post-its here.

I quickly printed the template, put my own post-it notes on the template, and then put important vocabulary from the first couple of weeks on a word document, spaced out so it would end up on the post-it notes, and, ecce! printed post-its!

At the end of each Latin I class, I asked students to divide into groups of 5-6 and gave each group a set of post-its. I also posted the following papers that said the following around the room:
1. I really know this
2. I sort of know this
3. I don't know this

Students were told to discuss the words in their groups, then stick the notes around the papers that best applied. Afterwards, I took pictures of the results to be my notes for planning the next week! Much easier than rifling through a bunch of papers. Sadly I don't have any images from the prep--I was too focused on putting everything together, but I do have a couple of pictures after the first class to offer (I figured you didn't need three sets of Latin I results). 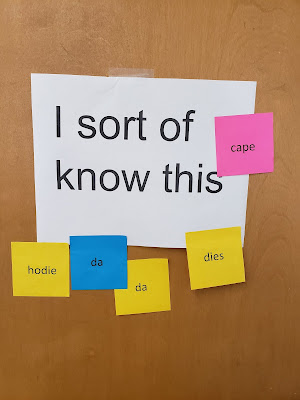 I took the pictures, re-sorted the post-its, and reused them for each Latin I class.

I then used the results--especially that "dat," "dies," and "cape" were commonly in the "sort of" know or "don't know" categories--to design a story for the next week so we could focus on those words.

Miriam and I are now planning to print more post-its for much more intriguing uses--with templates that we'll share with you in future posts!
Posted by Rachel Ash at 7:30 AM