Dealing with History in a CI classroom

One of the struggles I've had this year in my CI classroom, in which we are untextbooking, is covering history and culture. These things can be compelling, but so often can be tedious as well. This Spring, my Latin I classes are reading Magus Mirabilis Oz as I write it and I decided to include "brain breaks" (if you will) from the text to cover history and legend. We are covering two major topics with some smaller points as well:

In part, I am choosing to focus on these because this is where my area of research has been drawn and it is compelling to me. In a much larger part, I am considering the following things:
When deciding how to start these stories, I was given assistance by national Black History Month and Women's History Month. I chose, specifically, to start Dido's story in the month of February and am continuing it through March. It was incredibly easy for me to do this and to focus on Africa's role in Roman history because Africa played an important role in Roman history that is often overlooked by many people, teachers or not. Here are the points I considered:
After starting with a basic geography presentation in Latin, I wrote three embedded stories that told Dido's Story. Each was accompanied with images that ranged from classic paintings to modern interpretations. The stories were no longer than a page each, with images. Each lent itself to a specific discussion and we used specific activities with each. 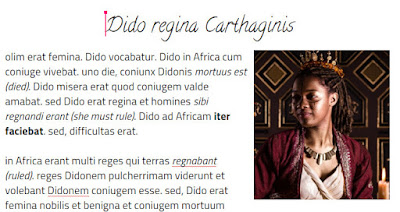 Dido's Story: regina Carthaginis - We meet Dido on her journey to Carthage. She has just lost her husband, but wants to be a good queen. The other kings in Africa want to trick her, but she ends up creating a large city and is loved by her people. This story ends on the cliff hanger that Aeneas is on his way to Carthage.

This passage lent itself to a discussion about the important of Carthage historically along with the implications of Aeneas' arrival.

Dido's Story: Ira Iunonis - This story gives Aeneas' back story and follows him to Carthage. The focus of this story is the storm created by Juno. It follows what Vergil writes, but in an embedded format.

This passage lent itself to discussion on fate and free will. We also discussed Vergil's imagery and some rhetoric devices. 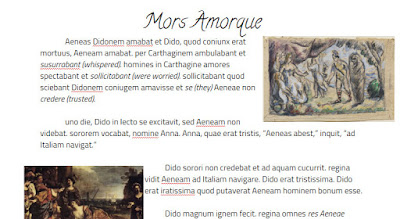 Dido's Story: Mors Amorque- This story picks up with Aeneas in Carthage. We learn of their love and then we learn about Dido's tragic death. We also see Aeneas go to the Underworld and see Dido, where she meets her husband, and true love, once more.

This passage lent itself to discussion on pietas (duty), fate, and love. We talked about Dido's death and what it meant for Aeneas. This passage also ended up being the most compelling. Students loved and hated this (in a "I want more hate"). They wanted Dido to get real revenge. See more responses.

This was incredibly compelling and comprehensible to the students. They loved the idea of reading what the uppers were reading and they appreciated being trusted with content considered this heavy. They really appreciated my taking time to honour Black History Month and that I chose a woman as our protagonist. They loved the imagery, the language, and the story. They even loved the ending... even though it was sad.

This has set them up for success (as this is the content on the midterm) and has made them excited to read about Caesar and the Gauls and Celts (who are the same people, but in different areas).

Did you (and how) incorporate Black History Month into your lessons?
Posted by Unknown at 10:21 AM