My letter to the governor

I am 27 years old and have never missed an election. I consider the "right" to vote a responsibility and it is one that I take very seriously. This past election was no exception. I have decided to write both the newly reelected governor, Mr. Nathan Deal, and Georgia's new senator, Mr. David Perdue. While my letter is typed here, I hand wrote it and mailed it (as evidenced by my picture). I decided to write it and mail it because, in the past, when I have emailed senators or representatives, I have only once ever gotten a response and it was from an aid who never followed up after I responded a second time. 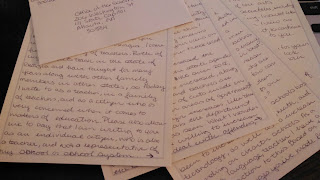 I want to ultimately let the letter speak for itself, but my reasoning behind these letters was based on a few things:

My name is Miriam Patrick. I am 27 years old and I have never missed an election. While I did not vote for you, I feel that it is important that I make my voice clear because you represent all of us in Georgia. I come from a family of teachers. Both of my parents teach in the state of Georgia and have taught for many years along with other family members in other states, so today I write to you as a teacher, in a family of teachers, and as a citizen who is very concerned when it comes to matters of education. Please also allow me to say that I am writing to you as an individual citizen, who is also a teacher, and not a representative of my school or school system.

Mr. Perdue recently said that Georgia has sent Washington a "clear message". I find this statement alarming because a 52% majority is not a clear victory and, if anything, should be a message to you as well as him that the state of Georgia is changing. As our elected governor, I would hope that you could best represent and make decisions regarding all of the people living in this state and not just those who agree with and voted for you. It is in light of this that I am writing to you today.

I have been a public school teacher for five years. I teach in Gwinnett County where 20% of the population speaks something other than English at home and 15.9% of families live at or below the poverty line for a family of four in Georgia. In my county, 55.46% of students receive free or reduced lunch plans.

When I look around my classroom, I see that my students do not fit neatly into one category or another. I have students of every race and ethnicity, and economic station; I wouldn't have it any other way. Given all this, I think it is clear where my concerns play a role in regards to your views on education as well as your track record.

While you have increased the amount of money the state spends on each student by $400 since 2012, the enrollment has increased, along with class sizes, and teachers are not being relieved of cuts made in 2003 while other areas of government are receiving major increases, like the 186 million dollars the department of corrections has seen. What I wonder is why you are willing to increase the budget to deal with offenders, but are not providing adequate opportunities that help prevent incarceration. Education plays a direct role, as you state on the governor's website, in making sure Georgia has a stable future, and you state that your goals are to make sure students are prepared for college, life, and the job market. In order for this to happen, shouldn't we be investing in our students and their future rather than the consequences of budget cuts, economic inequality, and lack of support?

On this same note, you recommended not only, initially, cutting the pre-k program in Georgia to half days, but you then recommended cutting the program to 160 days and also cutting over 300 classes and programs as well. While you did also bring back the 180 day program, the cuts on teacher salaries, program cuts, and increases on class size remained, forcing pre-k teachers into the same situation k-12 teachers face every day. We know that class size makes a difference in regards to teacher and student relations, individual instruction, and individual needs of students (whether they are placed in gifted programs or special needs programs). Why would you continue to increase the demands on teachers while not supporting them to ensure that our students can do the best they can? You say that you want to increase the percentage of students who are on level by the third grade. How can this be done, at any grade, when neither teachers nor students are supported in these areas?

Much of your focus on schools has been to increase science, math, and technology, as well as to increase spending on charter schools. As a foreign language teacher in a public school, I have a strong reaction to this. Based on the cuts and changes you've made, foreign language has taken a back seat and must now fight to keep their programs alive and student numbers up. Given the fact that 1/5 of my county speaks something other than English at home (and that this does not include people who simply speak another language), how can you not include foreign language in this vital set of skills students should be exposed to? You have discussed the importance of math and science, as well as language arts, but you have forgotten how important it is to be able to work with, communicate with, and understand the people we live with and around.

Georgia is losing teachers. Georgia is gaining students. This system cannot maintain itself at the rate it is going. Having shared with you my thoughts and concerns, I'd like to invite you to spend a day with me in my classroom. I want to extend this invitation to you so that you can see what a day is like for a teacher like me and so many others in the fields of arts, languages, and other specialties, including technology and engineering teachers. I would like this conversation, which I view as one of the most important, to continue, and not end with my letter to you.

Thank you for your time and I look forward to your reply,
Miriam Patrick