Since I feel the need to write a dissertation each time (I shouldn't joke about that, I'm sure it won't be funny when I'm actually writing my dissertation) I write a summary of my day of comprehensible input training, I got worn out as much from that activity as I did from the input of information, level of thought, and general effort required by the seminar itself.

Happily, it's been a few days and I'm feeling a little more rested, at least mentally (physically, I've been working on my new house, so not so much).

As a quick resource, our presenters created a blog so they could readily provide more resources and information for us. You can access it here.

Day three was Lauren’s testimonial. She had the good luck to spend two years in Italy in middle school (whether she realized it was good luck at the time or not). In Italy, Lauren attended the American International School and took Italian and French and by the time she hit high school she was able to start in French 2 and this launched her career in French.  When she started teaching, the big push was the Natural Approach--total immersion--and there was a problem. Her high school French teacher never spoke French, and she was not really all that conversant herself. Lauren solved the problem by studying abroad in France. She returned and taught her French with total immersion, but by the end of the year--even by the end of three years--the students were not able to speak French. She blamed the kids (obviously they were lazy) and wondered if she should leave teaching or at least stop teaching French. About this time Lauren attended a TPRS workshop led by Blaine Ray and had an experience much like mine: she was able to go home speaking Spanish and knew there was something to this method.

From there, her teaching experience turned around. She definitely didn't know what she was doing, she definitely made "mistakes", yet the kids were speaking. Her program quickly grew to full-time, and when she came to Atlanta, since the other teachers in her program were not into TPRS, she kept it secret. However, in her current school the French program has grown from three to eight teachers and Lauren is the department head. Needless to say, she is no longer hiding her love of comprehensible input.


CI is exhausting.  It takes so much more energy than worksheets and following the textbook.  There is no hiding from that. But it's worth it. Students are more involved, more excited, and learn more than any other teaching philosophy I have tried.

But there are variant results--it is rare that one class reacts the same as another, and while all kids learn, there will be times that what you've done simply flops. As Keith told us, just because it works one period, doesn't mean it works another (and vice-versa).

But you're teaching for May. Not for summer break, though you'll have earned it, but for where you envision your students in May. What should they be able to do? What are you expected to have taught them in order to maintain compatibility with the other teachers of your language and at your level? Those goals are what you keep in mind to guide your teaching and motivate you. And if you don't make it a whole year? So what? Try again the next year. It's taxing. Just keep May in mind, and eventually you'll get there.


We discussed and demoed some activities on the third day that allow the teacher to be a facilitator and not the entire source of energy and information. Comprehensible input does not have to be delivered by the teacher--as long as it's understandable messages in the target language, it's comprehensible input and students are learning. 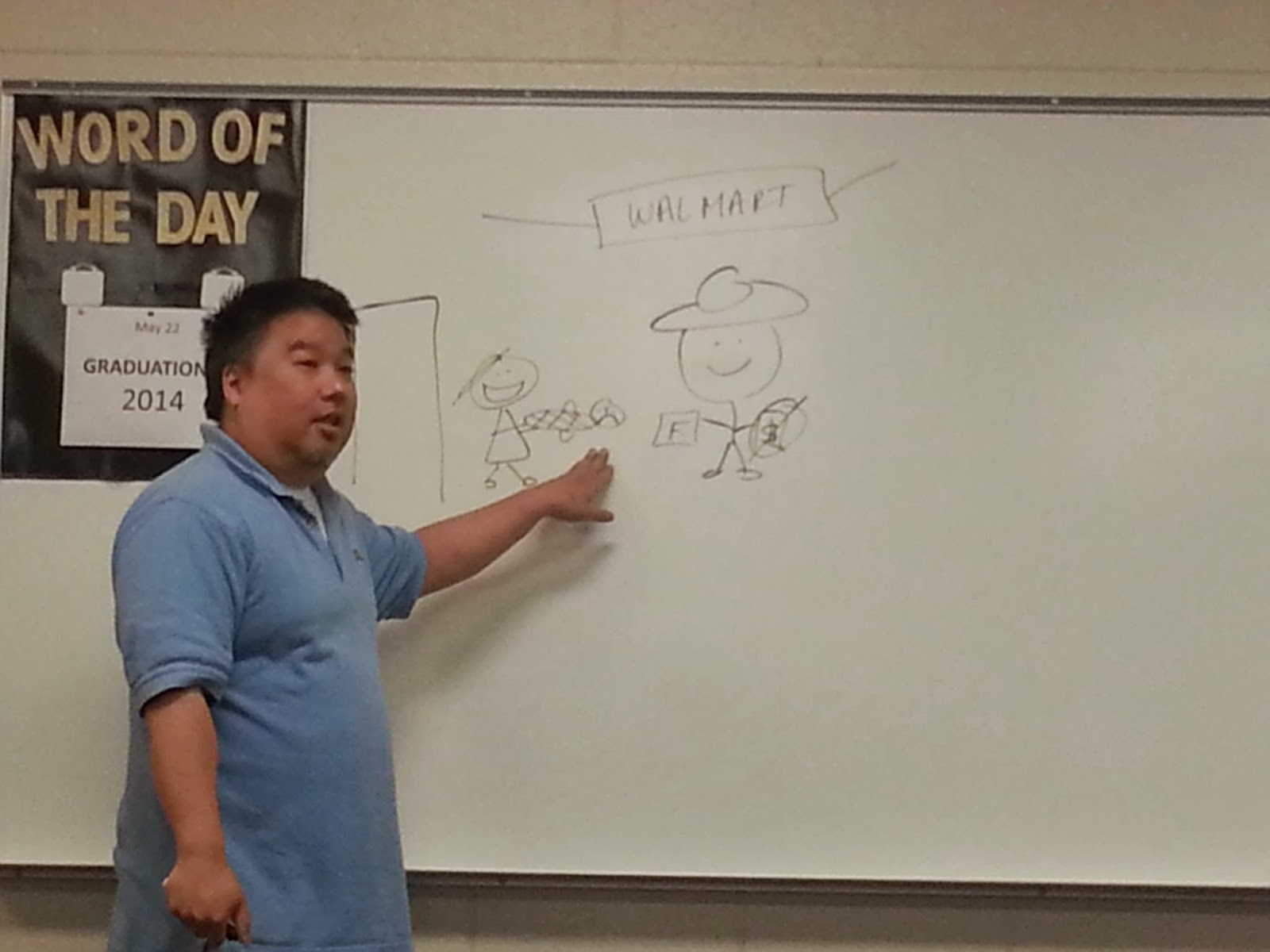 Keith has written about this on his blog; the instructions are pretty straight forward: Take a word you want to introduce to the students (like “rex” or "king").  Then ask questions about it.  Basic question words, words they know.  Ask what kind of person or thing it is, what is he/she/it doing, what he/she/it is carrying, where, add another person, etc.  Circle each addition as they make it. As an extension activity, the next day you could put image up, circle it, do a timed write, etc. In case you are not clear on how much fun this sort of activity really is, Keith allowed me to post this demo video (the demo is in English so all of us would be on a level playing field):


To prepare for this activity, Keith handed out paper copies of the story but we were told not to look at it. Keith then acted out and told the story. Then he asked us to read the story silently, asked if there were any words we didn't know, and then asked us questions about the story to reinforce it. He said he'd normally follow this with a choral reading (having the class translate the entire story together into English in chunks) to make sure that everyone is clear on the meaning.

Once he felt we knew the story, the way was clear for Reader's Theater. In reader's theater, the students act out the story as the teacher reads it out loud.  Choose students you know will do a great job, and really act up the parts, and give the audience (rest of the class) the right to make them repeat a scene if it's not done well enough.


Pass out cards with sentences from the story, out of order.  Students sit in groups of three. The first student has one minute to draw the sentence from the first card (every group is given the cards in the same order, just a different order from the story) without showing his group.  Then second student finds the sentence in the story, has one minute to tell the sentence to the third student.  The third student writes the sentence down. This activity works best when students are really familiar with the story.  It's good to add a detail like “mother has a hat” so students can tell one stick girl from another. Keith does it competitively, but I'm not sure I will.


After those activities, we did a demonstration of a dictation (written up here on Keith's blog, and here on Latin Best Practices). I found this interesting because I have been doing dictationes this year, but without really experiencing one myself, so I was excited to see how someone else does it.

Lauren ran the demonstration and she posted the guidelines she puts on the board for her students:


Lauren uses words for punctuation in her dictations and keeps them on the board and stops, knocks, and points when she uses them. I haven't done that before, but am considering it now--great way for students to hear even a little more Latin. Another difference is that Lauren does hers chunk by chunk--There is a giant bird (then shows on board) who soars through the clouds (then shows on board)--while I have been doing mine in complete sentences. My favorite difference, however, that I will for certain bring into my classroom next year is that Lauren puts the entire story from the dictation together at the end.

All the presenters agreed that it's best to limit dictations to 8-9 sentences.

Dictation NEEDS to be necessary to the current learning focus: vocabulary or structure or both. Students really get structures and vocabulary from the dictation. It can be used either for review or introduction.

A fun variation that requires students to be previously familiar with story and words is a Running Dictation.

As a quick addendum because my note-taking was sort of set aside when we broke out into the separate groups, in "class" we did trash ball (Keith calls it the "Word Chunk Game") and popcorn reading (on Latin Best Practices)

Email ThisBlogThis!Share to TwitterShare to FacebookShare to Pinterest
Labels: comprehensibleinput