Singing a Song for Memory's Sake

I think I need to start by apologizing.  I have let almost two months slip by without posting anything.  I am sorry.  Miriam and I started this blog because we hoped to share ideas and generate conversation about classroom practices.  That really cannot happen if I don't bother to post anything.

I have excuses; some of my excuses will likely actually become blog posts.

Generally, though, it's the beginning of the school year, when I spend most of my time trying to get my head on straight and my feet firmly planted.  I only started reading blogs regularly again about a week ago.

One of my and my students' favorite activities so far this year has been a simple one that I have actually done before in class--without integrated technology.

I believe in using art to help students elicit better and truer connections between concepts, help them learn or memorize the many, many forms that Latin tends to ask out of them, and help them create their own relationship with the material we cover.  Sometimes I have them draw.  Last year I made them write a haiku (an activity I hope to develop more fully this year--I enjoyed the exercise and Latin, with its lack of emphasis on word order, is particularly well-suited to haiku).  And there is always music.

We sing in my class almost from day one.  A song for the present tense.  One for the noun forms.  I have songs on a CD I purchased, songs handed down to me by other Latin teachers, and even some that I have created myself.

All of that helps, and when students fill out surveys at the end of the year listing what worked and didn't work in my class, the songs are always listed as the most helpful aspect of class.  They are also often listed by some of those same students as the things that they disliked the most--but I can take the bad as long as I get the good.

About a month ago (sorry again!), my students were being asked to learn the forms of hic and ille, which are very irregular words.  I actually don't have a song in my pocket for those forms, so I couldn't offer them a quick recording they could put on repeat at home until they learned all the endings.  Instead, I chose to ask students to form small groups (this is Latin II, so they have all had my class before, we have a good rapport, and I don't need to either give them a seating chart or choose groups for them) and create songs that incorporated all of the different forms.  The rule was that the songs couldn't be too long and they had to be catchy.

Roaming around the room as students worked, I found some students singing various children's songs together while others were furiously thumbing through their music lists on their smart phones, playing bits of songs they thought might work as the rest of their groups listened and commented.  Each group had to repeatedly sing each form to test the forms with each new song.  Each group had to sing the forms several times to practice and get the song right.

Then came the recording.  This part of the activity needs some tweaking before I do it again, and it really just came to me as a whim when a student asked me "Will we be singing these for the whole class?"  She somehow managed to look both hopeful and worried, and I found my normal answer ("No"--because I don't like putting students on the spot when I don't have to--besides, even without incorporating a class performance, I was getting what I wanted out the activity: practice and repetition) somehow lacking.  Instead, before I knew it, the words "We'll be recording them" had slipped out and she left pleased.  I stood in place, wondering how I was going to pull it off. 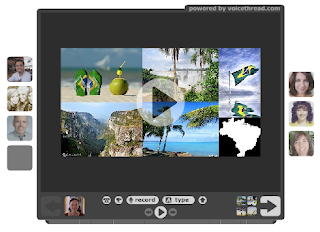 Enter VoiceThread.  You have probably heard of it.  It's an online service that allows you to choose an image, set it up as a "voicethread" and then open it up for "comments," which can be recorded audio, typed, or drawn.  There are many ways to use this service, most of them much more creative than my simple public repository for student songs, and I promise a future blog post that highlights this free web tool.

The next day, when they were due to have their songs completed and ready to record, I showed my students how to make a voicethread and how to record their songs as a comment on an image of their choosing.  I logged them in to my own account, offered them a microphone, and let each group take a turn.  Most groups took a couple of tries to record their songs successfully (just think--more repetitions!).  I had the rest of the class working on a different activity while a group at a time recorded.

That evening, I quickly posted links to each voicethread on a blog I created solely for this kind of purpose, created a QR code (via Kaywa) that linked to the blog post, and posted the code outside my door.

The one thing I would do differently if I had it to do over (and I will--next year) is to have one voicethread for each class, or perhaps choose a different repository system altogether.  Not that VoiceThread isn't pretty, but it has its limits.  On a free account, for example, I can only create five of my own voicethreads (a problem when you have 10-12 groups recording).

My students really enjoyed this, took songwriting much more seriously when they realized they would be recording their songs, and got to repeat the forms of two difficult Latin words over and over, without it feeling rote.

What are some ways you incorporate songs--especially songwriting--into your own classes?
Posted by Rachel Ash at 9:46 PM