This is now also hosted on my new site, as a Throwback Thursday post!
I love Legos.  As I type that, I realize that I start my posts with those words a lot: "I love".  I think, though, that it's my passion for all the things I do in class that lets me know I'm in the right place.  I always have something to get excited about.  Today, it's Legos.

Legos are amazing.  You can use them to make almost anything.  I remember the first time I got a Lego piece that had a hinge.  It opened my building world in a new way--Legos with moving parts meant building airplanes with functioning cargo bays, rockets with a door for the astronauts, a drawbridge, and, with a bit of thrust on my side, a sort of catapult that worked.  I remember these different projects because through Legos, you get to imagine, plan, and construct a concept.  It becomes personal.

I can't bring my students to Rome.  It'd be neat, but it's also prohibitively expensive, so only a few would be able to go, even if I were in a position to design and carry out a student trip.  I also can't bring Rome to my students.  Not only is this also prohibitively expensive, I am pretty sure there are laws and regulations regarding moving large marble (okay, marble-faced) ruins between nations.

I can, however, have my students build Rome.  I would not even be the first person to do this.  Over the years it has become tradition to ask students to build a model of some part of Rome: the Colosseum, the Pantheon, the temples and aqueducts and streets (it's especially fun to build Roman streets using food!).  Building was a major part of Roman life and experience; Rome was always under construction in some form of another, much like cities today.  Romans were known for and proud of their engineers and architects. 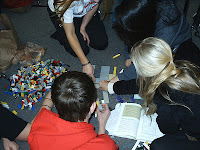 Recently, though, thanks to a student's idea, I asked students to bring in Legos.  Any they would like to donate.  We didn't get a huge collection going (though now I know I want a huge collection, so it will happen in time), but we got enough to designate some Legos to each of five groups of students.  We had hit a section of the book that discussed Roman military camps, and students were not really diving into that particular cultural topic.  We needed a way to connect to the camps emotionally, or at least personally.

Legos make connections.  Almost all children play with Legos, which means there is automatically a positive emotional response to the nostalgic toys. 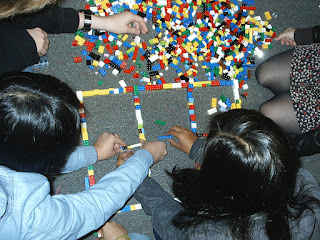 In the five groups mentioned above, I asked students to do their best to rebuild the Roman military camps they saw drawn in their textbooks.  They had a pile, or bag, or box, of Legos and their ability to convert concepts symbolically.  Each group worked together diligently, instructing, sometimes arguing with, each other to create the best representation of a Roman military camp that they could build with a limited supply of Legos.

It was fun, and each group came out of the activity with the ability to describe the camp layout to me.

Next year, I want to do something similar, but take it much deeper.

When we learn about the layout of a Roman city, why not build a Roman city?  It can be done cross-class, with groups in each class responsible for different parts of the city.  I can create a map layout on a cheap, dollar-store shower curtain, and they can piece their city together on the map.  We can follow up with "tours" of the city (maybe I'll bring some of my son's minifigs--the Lego people--to help focus the discussion), telling stories that take place around the city, and generally using the huge Lego model for a while in order to really help students get familiar with the baths, amphitheaters, etc., in a meaningful way.

If I require students to communicate in Latin while they build, imagine the deeper, more creative thought they have to reach in order to get the job done.  Yet they will be using Legos, which will make it a much more appetizing type of activity.  Building with a familiar and generally well-loved toy will soften the effort it will take to think and speak in Latin.

I think the next step would be to move outside the range of Legos and have students achieve simple feats of engineering that reflect Roman achievements, such as aqueducts, catapults, and the arch, with basic supplies such as bendy straws, rubber bands, and popsicle sticks.  If they have to solve problems (here are these items, now make this) in Latin, it forces students to use Latin in a very meaningful way.

Bringing culture to life using Legos will help my students transition from building-block language to truly mastering it as a communicative force.
Posted by Rachel Ash at 10:09 AM

Email ThisBlogThis!Share to TwitterShare to FacebookShare to Pinterest
Labels: artsandcrafts