I am a huge fan of art.  I have drawn all my life--I can't remember a time when I didn't draw.  And I have always used art and drawing to help me connect to the world and to understand feelings and concepts that may not have been as clear otherwise.

Art is an effective tool.  Too often, art is pushed aside as unnecessary, a distraction from what is "really" important.  In the educational climate today, with a focus on "core curriculum"--a term that marginalizes other valid topics of instruction--many schools are shutting down art programs as well as other "electives".

But art is actually a great window into another aspect of brain function.  All too often in school we focus on using recall, memorization of facts, and don't tap into the creative side of the brain; whether or not you agree with Gardner's Multiple Intelligences, approaching information from multiple pathways builds more connections between neurons and simply makes it easier to remember.  When those pathways cross brain hemispheres, the connections are more varied and become stronger.

My students are tested with explicitly grammar-based questions.  I have been struggling with the best way to help them understand the grammar and still stay true to my wish that Latin instruction be about communication and using the language.  It's a difficult balance.  My upper levels especially have to deal with topics they never think about: the subjunctive mood, the passive voice, participles, etc., and they have a hard time wrapping their heads around the concepts in English--in Latin it becomes nearly impossible.

When I most recently lived in Oklahoma I taught in a small private school, and that school had adopted a program called A+ Schools.  This program champions the use of higher-order thinking and the arts, not only as separate subjects, but incorporated into the classroom as a means of deeper learning.  I experimented a small amount with art in my classes then, but really only started using it this year.

I was frustrated because my students had overall failed the previous test.  I was even losing sleep--which turned out to be the perfect situation to remember A+ and the idea of art infusion.  The next morning, I swept into the room carrying sheets of bulletin-board paper and gave the class their instructions: in groups of four, they had to "draw the subjunctive." 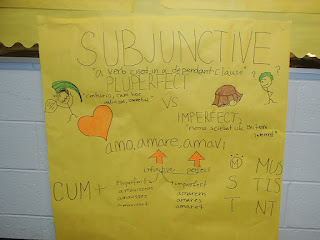 Whenever a teacher asks anything that, well, weird, there are always protests and questions.  "How do we do that?" is the most common and obvious question.  And, since I really wanted them to internalize and think about the information and the ways in which it could be represented visually, I refused to answer that question.  In truth, there was no right answer.  If they wrote sentences and illustrated them, that would be fine.  If they created a flow chart, that would be fine.  Whatever path to visualization they found would please me, so I simply told them, "You get to figure that out--all I want is that it represent both the imperfect and the pluperfect subjunctive."  I knew that the completely new approach was uncomfortable for them--so I went around, reinforcing that I'm not looking at the quality of the artwork here (I love stick figures!), just the quality of the connection.

Unfortunately (perhaps tragically) I don't have any pictures of that first--and best, in my opinion--round of drawing grammar.  Since that first try, students are much more willing to draw abstract concepts, and several have approached me to let me know that it really helped them understand what we were learning.  It forces them to process information--even if, as in the most recent version of the activity, they were creating and drawing sentences more than interpreting grammatical concepts. 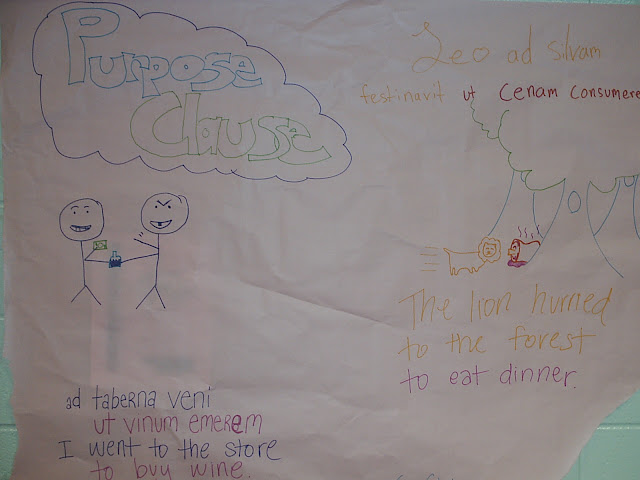 The success that my students expressed to me was reflected in their work.  After they had created their posters, students had no difficulties creating sentences using the subjunctive correctly. 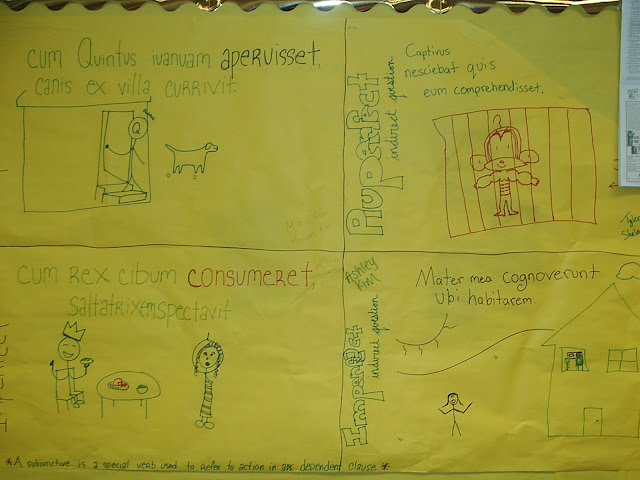 In addition, a couple of weeks ago, I created a "scavenger hunt" based on the posters my students had created.  The scavenger hunt really brought closure to the activity that I hadn't realized it was missing--so I will definitely be doing that again.  Since all of the posters are student-conceptualized and student-created, the scavenger hunt remained personalized and caused students to read each others' posters and interact more deeply with that information than they had beforehand.  As a bonus, students enjoyed the chance to have their work viewed by their friends.

Are there other activities that use art in this way?  I know I have taken this sort of large activity (that takes up almost an entire class period!) and minimized it into students writing and illustrating a sample sentence for a grammar topic (I did this last week as part of a learning station).  I have used other art forms (such as haiku--which is such a versatile poetic format!) that students must still use with the grammar, and asked them to create songs to reflect new grammar topics (which inspired me to create one myself).  What ways have you asked students to "draw" connections?
Posted by Rachel Ash at 12:13 PM