But I know that in each of my classes of 30 or so students, maybe two or three of them feel the same way I do (a high number, but I do teach Latin, and generally the more logically-inclined students are the ones who sign up).

So when I teach grammar, I try to find ways to make it easier to digest.

One method, which I'll publish here later on, is to do daily snippets of Latin I call "Daily Grammar Practice"--a method I completely stole from my year of teaching English and re-imagined to fit Latin.

Another thing I do, which I am sharing here in this post, is to help students draw connections between the grammar concept and something more concrete.  The rare 2nd declension noun that ends in "r" (like "puer" and "vir") is a ninja in my classroom ("he's sneaky and infiltrates the 2nd declension in secret").  Adjectives are stalkers--they want to be just like the nouns they describe (but are ultimately themselves--to avoid declension confusion).  And conjugations are like cookies.

I would love to take full credit for this idea, but it's honestly not my own.  A wonderful lady presented at Nationals about how she uses Oreo cookies to help students understand conjugations.  At the time I was completely anti-explicit-grammar, so I sort of went "that's neat" and filed the idea away but did nothing with it.

Fast forward many years and different experiences.  I find myself in a situation where I have to teach some grammar explicitly.  And last week I was facing the daunting task of teaching conjugations, which tends to make some students want to bang their heads on their desks (I know, because they do it). 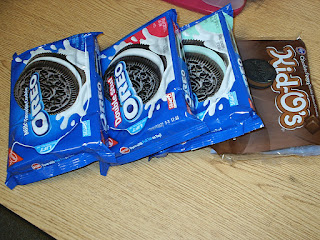 I didn't tell them anything about what I was doing.  I just had them sit in pairs (I cannot afford to buy enough cookies for each of my 120 Latin I students, alas) with a paper towel and four cookies in front of them.  Each cookie was different--one was the classic Oreo, one was double-stuffed, one was mint, and one was chocolate.

Then I had them make observations: how were the cookies different from each other?  What was special about each one?

On the board I had drawn a picture of each type of Oreo and given an example of a verb in the correlating conjugation.*  From there, they picked out the dominant vowel for each conjugation and I helped them figure out the main features of the infinitive for each conjugation (conjugations, infinitives, sum, possum, volo, and nolo are all grammar features in this particular chapter). 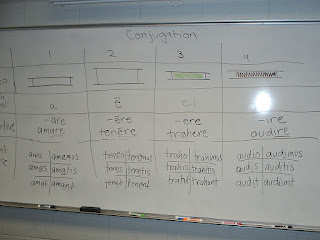 The completed chart on the board looked like this:

Which is a lot of grammar to digest.  So that was it for grammar for the day.  We sang songs and made up some Latin stories together (generally via TPRS and what the TPRS gurus refer to as either PQA or mini-stories).

We didn't touch the grammar again until the next day.  I had the desks arranged in groups when they entered and they self-selected who they would be working with simply by sitting down.

This is where I added my own twist to the lesson.  Yeah, we connected conjugations to cookies, something concrete, but it's still a little forgettable.  I really wanted students to synthesize the information and make it their own.

So I had them make posters.  I actually do something similar to this quite often with abstract concepts.  I told students each group had to make a poster that answered the age-old question, "How is a Conjugation like a Cookie?"  After fielding the normal range of questions, like "How do we draw that?" ("That's the fun part--you get to figure it out!"), "Can we use other types of cookies?" ("Yes"), "Can we come up with our own concept?" ("Yes, but let's keep it food-based, just for simplicity."), I told the kids to go at, and the biggest rule was that I didn't want to see my chart from the day before repeated. 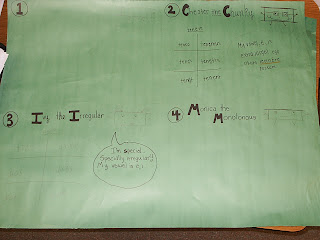 My goal was for them to find their own connections between the conjugations and a symbol that they have chosen.

Some groups stuck with the Oreo theme, but recreated the concept in their own words with their own connection.

Most groups came up with their own cookie examples: sugar, chocolate-chip, oatmeal-raisin, etc.  Some groups wanted to really move outside of cookies and find their own concept.  I have a pasta poster, a sandwich poster, a pocky poster, and a bread poster.  Most importantly, though, they took the concept and made it concrete for themselves. 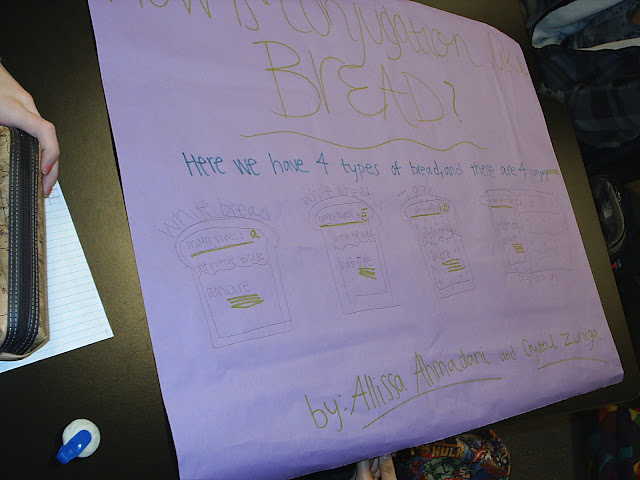 *For Latin teachers interested in doing the same activity, the Oreos break down as follows: